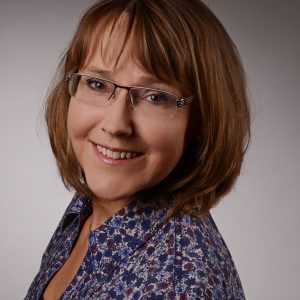 Edda Vorrath-Wiesenthal can look back on 20 years of experience as an editor in the field of educational media and textbooks. After training as an industrial clerk, the Hamburg native discovered her enthusiasm for foreign languages and began studying English and French at the Department of Translation, Language and Cultural Studies at the Johannes Gutenberg University in Mainz in 1983. Having gratuated with a degree in translation, she spent two years working in London.

She then returned to Germany and soon turned her back on translation. In 1991, she joined the editorial department for foreign languages in adult education at a large educational publisher in Stuttgart, where she developed various English textbooks until 2006, first as an assistant and shortly afterwards as a publishing editor. She gained practical experience in teaching English at the German Volkshochschule (Adult Education Centre).

Since 2007 she has been working as a freelance editor, editing textbook projects in English and German as a foreign language for publishers in Germany and Slovenia as well as proofreading, with particular emphasis on her special fields of didactics and technology.

Member of the German Association of Editors and Proofreaders (VFLL) since 2007, volunteering in regional goups management (RG Stuttgart) since 2013

I look forward to your enquiry by e-mail or telephone.

Scroll to top
Manage cookie consent
In order to provide you with an optimal experience, we use technologies such as cookies to store and/or access device information. If you consent to these technologies, we may process data such as browsing behavior on this website. If you do not give or withdraw your consent, certain features and functions may be affected.
Manage options Manage services Manage vendors Read more about these purposes
View settings
{title} {title} {title}